Two roads diverged in a yellow wood,
And sorry I could not travel both
And be one traveler, long I stood
And looked down one as far as I could
To where it bent in the undergrowth;
.
.
.
I shall be telling this with a sigh “delight“
Somewhere ages and ages hence:
Two roads diverged in a wood, and I—
I took the one less traveled by,
And that has made all the difference.

Starting with the lines of my favourite poet— Robert Frost, with “slight” modifications. I had a tough choice to choose between GATE-Electronics and JAM-Physics, I chose the one “less traveled by” and that has made “all the difference”.

NOTE: Those who don’t want to read how I ended up in love with Physics but are here take notes regarding my preparation can head-up straight to the heading: “The Journey to AIR-22 (IIT-JAM) & AIR-54 (JEST)”

My Eternal Love for Physics

It predates back to the summer-vacations after the 10th class. In my city (Aligarh) almost every student prepares for the “SSSC Entrance Exam” of Aligarh Muslim University (It has certain perks of its own). Since more than 30,000 students appear for it and seats are in hundreds taking a coaching/crash course during vacations is quite common. So I joined one. I being an inquisitive person used to question a lot since my school days and teachers generally used to say that I shall get to study that thing in my higher classes. I did the same in the coaching and my chemistry teacher told me: “Jab Bada ho jaye tab khud Research Karlio abhi ye hi padhle!” (Do your own research once you grow up, till then study this only!). Yes, that was the moment…
Nevertheless, I cleared the exam (as one of the highest scorers😜). Then like a typical Indian student joined coaching for JEE. With the hectic day-long schedule that idea almost got lost. Until the day when my Physics instructor started the topic “Modern Physics” in the class. The way he explained things about quantum physics and relativity, fascinated me. Yup, that was the “Great Realisation” for me: “Physics will be the love of my life”. But it was too late I could think of joining a core science degree like; BS-MS (TBH I even had no idea of this degree existing and B.Sc. unfortunately, is something that is considered “untouchable/second choice” for PCM peeps in our country, due to a variety of reasons). So I decided to take up “Electronics” as my branch (and could compromise with college) to further explore Physics as I thought it was closest to what I wanted to pursue BUT my bubble utopia burst soon enough.

It was November of 2018 I was worried about what to do after engineering; like any other 3rd-year engineering lad. I was literally googling “can an Electronics Engineer pursue Physics after B.Tech.” and I landed upon Quora: Can an electronics and communication engineering student pursue Ph.D. in physics after under graduation? From here I came to know about IIT-JAM, searched more ’bout it, and downloaded a few previous years’ papers. The first thing I realized was that I could have attempted almost 40% of the questions right away. I am not talking about answers being correct or not I just meant that I was acquainted with the syllabus. Then after some consultations, I decided to prepare for it.

I had a friend in B.Sc.-Physics, AMU, so I contacted him. He helped me in collecting notes and study material of Career Endeavour and AVS-Fiziks from his seniors in M.Sc. Fast forward to June-2019 I got an internship with “Cummins India“, Pune. So I was occupied there till the mid of July. So preparations no yet. I just started the Vectors from Mathematical Physics (I’ll explain why maths 1st) but no progress. The fear of ending up at a dead-end started to haunt me. I was so freaked out that I even finished my internship 2 weeks earlier than the schedule and returned home. It was in the last week of July when I hit the REAL JACKPOT: Physics After Engineering especially: How to do MSc Physics after B.Tech (any stream)? What happened after was unprecedented at least for me…

I was welcomed to the community by the great “Niket Shah” himself. 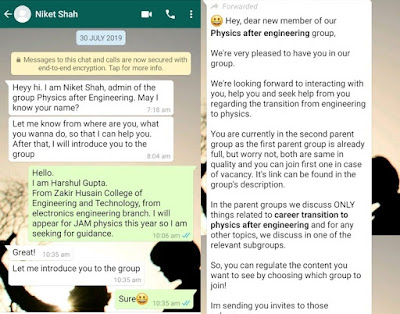 I don’t think they do this anymore😜. Anyways I was lucky. After reading blogposts and seeking enough motivation from seniors I decided I will prepare for harder exams that were JEST & GATE-Physics, than JAM (Motivation). ‘Coz even if I somehow would have failed at difficult exam like JEST, I would have ended up with more than sufficient knowledge required to clear a bit easier exams like IIT-JAM.

As people learn from their mistakes thus I decided not to repeat the same mistake I did during JEE preparations, which was following the herd and waste your resourceful time in coaching. So I decided to prepare on my own without attending any classes. 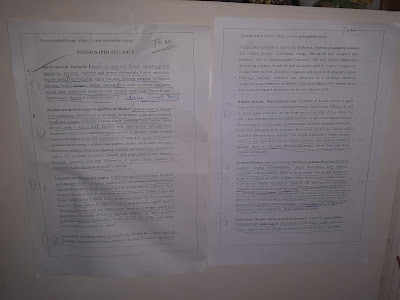 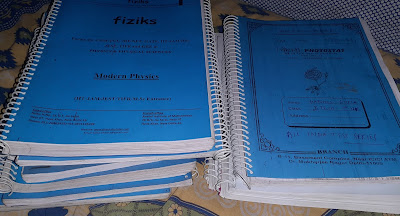 NOTE: Package of Fiziks contains many textual and mathematical errors too, so one has to be extremely careful and inquisitive while reading those and will need to refer the books from which they have mirrored these packages. I’ll list the ones I could find. 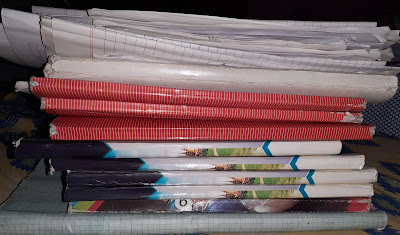 Coming to the order of subjects which I followed (and Why?) & different books that can be referred to. Remember you can follow any particular order for your preparation if mine doesn’t suit you. All you need is some motivation and loads of hard work, smart work, and perseverance.

That’s how I winded up everything and moved ahead towards attempting the test series I bought in the last 1 and a half week. On a personal note, I would advise you to give more time to the test series, around 15+ days.

If I would be honest I did no extra efforts for JEST other than the preparation of JAM + learning Langrangian & Hamiltonian Mechanics. This was largely due to the fact the about 70-80% syllabus of JEST comes in JAM but in the form of easy questions. In fact, I just solved 2 previous year papers in the gap of a week between JAM and JEST. Sometimes all you need is a stroke of good luck.

In case I would have missed anything (though its chances are rare) I have some Miscellaneous pieces of advice for people trying to find their path to this world.

Finally, the last driving force you all need is a very “Personal Motivation“. I was just madly motivated to see those priceless tears of joy again in the eyes of my Father. The only time I had seen him with tears, in my life was when I qualified the Mains and got 8th rank in the 12th Board on the very same day! And then it was the day when I told him my result and said, I’m gonna make it to the IIT-Bombay!! 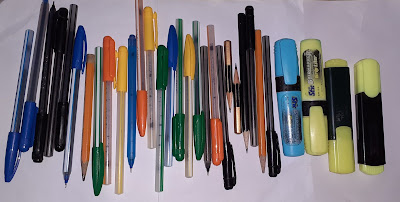 All these empty pens & highlighters and worn-out pencils aren’t the proof of anything but just my another charas of collecting these!!
Special thanks to:
The legend Dushyanth Edadasula (the man behind the community PAE), and all the community members who helped me throughout in the “Problems group” whenever I was stuck with one, especially to Rajdeep Dwivedi, Kishlay Singh, Rishabh Kaushik, Raj Upadhyay, Murli. Niket Shah for helping me out regarding career choices whenever I needed it. To all other seniors and juniors of the community. Especially, to my Mammi & Papa for bearing with my awkward schedule of waking through nights and sleeping in afternoons (probably US timezone 😂) & supplying me with necessary teas & coffees in the awkward times of the night! To my rest of the family, Vanshika, Kakul, Vidhan & Momin for being a constant motivator and apology for anyone, whom I have missed mentioning.
About the author:

Mr. Harshul Gupta has secured an All India Rank of 22 in JAM & 54 in JEST in the year 2020! He also, like Rishabh achieved this feat while still in his final year of engineering. We, the PAE (Physics After Engineering) community, are delighted to about his achievement and wish him the best in all his future endeavors. He is currently looking forward to joining a Master’s programme in one of the premier IITs in the Country.

Also, do visit all other similar posts and lot other extremely useful content of our blog Physics after Engineering.
Below is a page with the link for our WhatsApp group with 700+ members all of whom are engineers who actively discuss and help each other out in entering the physics stream after engineering.
http://citizensofscience.com/p/blog-page.html